Dylan Laube, scoring a Long Island record of 47 touchdowns this past season, rushed for 2,680 yards on 249 carries. In his career at WHB, Dylan racked up an astonishing 6,495 yards rushing on 687 carries. In the photo above, Laube holds the Long Island Champions trophy.

Suffolk County Coach of the Year, Bill Parry, addresses his team and their fans.
To view more photos of the 2017 Long Island High School Football Champions parade, click the slideshow below:


About the camera gear
To ca 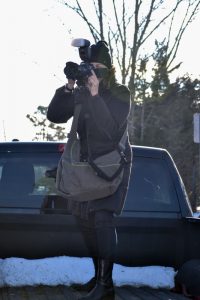 Professional photographer Cheryl Machat Dorskind is a three-time best-selling author and newspaper columnist, an international mentor, a photo educator and adjunct Full professor, a workshop and online instructor, a speaker, and an acclaimed “New York Times” fine-art photographer and handpainter.

She is a member of the American Society of Media Professionals (ASMP) and Canon Professional Services and profiled on Museo.

Team up with internationally noted fine art mentor Cheryl Machat Dorskind and expand your photographic vision. She is the perfect mentor for the visual artist searching for creative, technical, and marketing direction.